Opening of the Hall at Werrap

The town of Werrap may be no longer but it has quite a history. Consisting of only a few buildings that serviced the local community it also boasted a football and cricket ground, tennis club, school building and Methodist church.

The town  began with the construction of a community hall. It is claimed to be the first such construction North of the netting fence and West of the 142 meridian. My great grandfather crossed the netting fence west of this location a few years earlier when looking for a selection and reported in his memoirs that he had crossed into land that was fit for neither man nor beast. Even today the farmers report that crops grow better south of the fence than they do north of it. It appears that the government of the day got it right when they selected the location for the fence designed to keep the vermin out of the good farm land.

Secretary to obtain price of sawn timber from Chaplin Bros. District to be canvassed for donations;

22/6/1896.
A building of pine logs and plaster to be erected. Committee to pay cost of land transfer from J. Nunn £1:4:0. Building material to be obtained from J. Ettelson  Jeparit.

16/7/1897.
That in the event of the Bank discounting the Trustee’s bill for £10. The following improvements be carried out not exceeding  £8.
New floor of softwood, 10 seats and ceiling of canvas and paper.
The Secretary to have outhouses plastered.

27/1/1900.
Permission from Public Board of Health to open building. Trustees to advance money to become 1/3 owners of organ.

11/7/1900.
Tender accepted for £23:0:0 for lining hall. The Education agreed to close the school for 5 days so lining can be carried out. The public be asked to help repair outside of building.

12/4/1905.
The head teacher agreed to cease storing his horse     feed in the building as requested.

14/7/1906.
Discussion ensued re enlarging the building and procuring extra seats and tank.
The secretary empowered to have work done for £55.

The football trophy is in our possession and will be erected in its glass case in the Hall. Quite a number of other furnishings and links including the original organ are in the area and will be available for the hall.

In the rebuilding of the hall the original material was not available. The old hall was replaced by a new structure about 1922. Considerable trouble has been taken to get material from other buildings of the same period and the construction has been the same as the original used in the construction of the Werrap Hall. When the Ilan is completed it will be used to display folklore of that period together with period exhibits of by gone days. Many of the pupils who were educated in the building early this century are anxious to make this an interesting item in the museum. 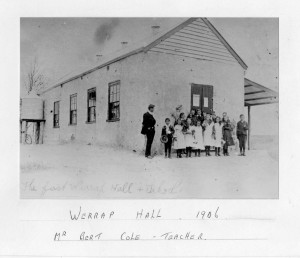 The Werrap hall started out as a slab building but was soon replaced with quite a substantial building both the old and new buildings were used for community meetings and functions, sporting club meetings as well as the church and school for a few years until other buildings were constructed for the school and church.

Opening of New Hall at Werrap,

The following advertisement was put out for the event.

Guessing the Weight of a Sheep Prize, 10s.

NOT only Relatives and Friends of the Bride and Bridegroom BUT EVERYONE INVITED. Commencing at 7.30 p.m.
Double Ticket 7s 6d. Single Ticket, 4s.

Today there is only a small piece of the foundation of this building remaining.

The School building was added on the West side of the Hall and was later upgraded. 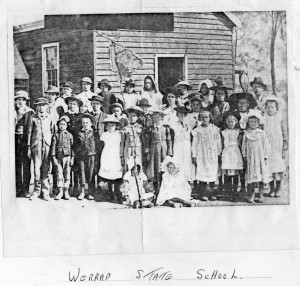 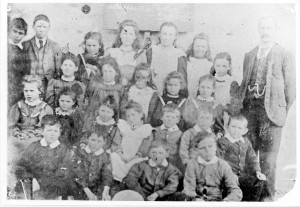 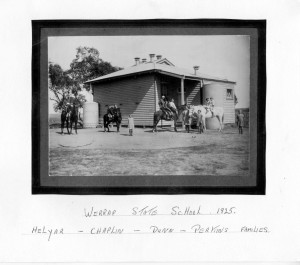 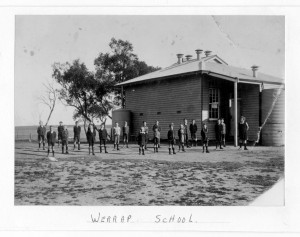 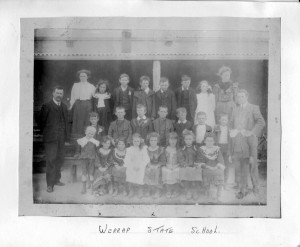 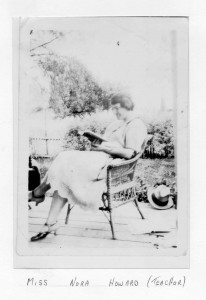 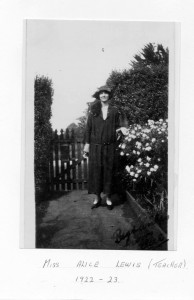 A football and cricket ground was added on the south east corner of the intersection. along with tennis courts and all three clubs were quite successful with the football team winning the local premiership in 1906 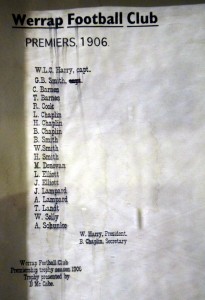 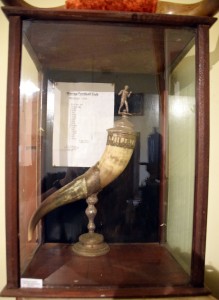 This trophy is currently located in a room at Yurunga homestead in Rainbow. 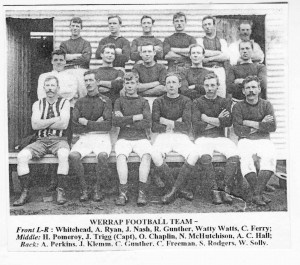 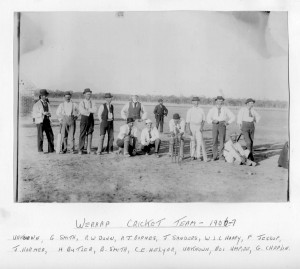 Don’t you just love the cricket outfits of the day?

And then there was a tennis club with numbers that many current clubs would be proud of. 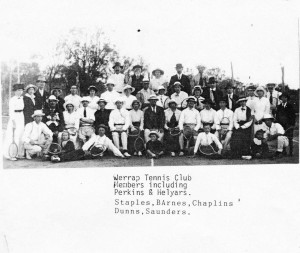 To the west of the school they constructed a Methodist church with visiting ministers from Jeparit and Rainbow once a month and services being run by local members at other times.

I was not able to find any pictures of the church but did find a church newsletter with a picture on the front although the newsletter was faded. 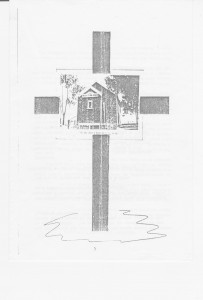 Its a pity to see the demise of a town that while it had no shops, it did have a very active community group. They fought with the PMG for years to get the phone into the town and eventually won but in order to get the lines into town they had to cut saplings for the phone line posts and install them themselves.

Today the buildings are all gone as are the tennis courts and football and cricket ground. A new fire station has replaced the church and only signs remain indicating where the school and hall used to be.