The following events were told to my brother and myself on a number of occasions during our youth while camping with the family at Lake Hindmarsh and at other times in our lives when the subject of Rainbow was being discussed. They involve my grandfather William Aubrey Miller who was the policeman in Rainbow at the time and was told to us by our mother Evelyn May Miller his eldest daughter and supported by my grandmother Evelyn Miller William (Bill) Millers wife. We never knew granddad as he died in 1942 at the fall of Singapore shortly after leaving Rainbow in 1940 to go to war. I don’t have exact dates as mum never told us exactly when these events happened but one of the stories she would tell us about our grandfather was in 1935.

What we remember it is as follows.

There was a disturbance in Federal street Rainbow one day in 1935, we are not sure if it was day or night at the time but I do have a recollection of night being mentioned by mum. A woman was running around the street trying to stab people or at least threatening people with a knife. Evidently it took four strong men to overpower her and take her to the gaol at the back of the police station while they worked out what to do with her. She was evidently mentally unstable and very strong and as she had not actually hurt anyone a decision needed to be made on what to do with her. She was examined and declares mentally unstable and committed to an asylum I believe it was in Ballarat.

As a consequence of this event granddad was made aware that this was not the first incident of this type in the area when someone commented to him that she was not the first and that there had been a woman of German decent that had similar issues from Pella and that a building had been erected to keep her in, Granddad decided to investigate the existence of the supposed cell that had been built for the purpose. He went out to Pella and after some questioning was shown the cell that had been built some 20 years earlier. I was led to believe that it was built sometime prior to the First World War. He discovered that it was built as a cell to keep the woman in, and also had keepers’ quarters for the rostered people from the community to stay in while caring for her. It was already abandoned in 1935 and we have no idea how long she was kept there only that she was no longer there in 1935. As he questioned the Pella community I would believe that he was aware of who the woman was and how long she was kept in the cell but mum either didn’t know or chose not to tell us any further details.

Mum often told us of these two incidents of mentally disturbed women in the area and that granddad told her that there was a gaol out at Pella somewhere and that it was built to keep the woman in, but mum never took us to see it, she just told us that it was at Pella.

One day my brother Kevin and I went out to Pella with Dawn Petschel to see what Dawn called the mystery house; it was out of sight at the back of the limestone kiln. As soon as we saw it, we looked at each other and turned to Dawn smiling and told her we knew exactly what this building was. We had been told of its existence many times but never expected to see it. It was the building erected to hold the German woman and consisted of a cell and keepers quarters, hence the two separated rooms and the small window for feeding etc. so the keeper didn’t have to open the door, just as mum had described it.

As the German community did not see this as a proud event in Pella’s history I am not surprised that the people who knew about it would not be eager to tell the story. But as a history buff and family historian I find stories of this kind where the mentally unbalanced, convicts and even a highwayman among the stories of barristers, judges, admirals, ministers, generals and viscounts. I believe it is important to preserve them all. We will probably never know her real story, who she was or why she became like she was. Was she driven to it by events of the time? She was probably one of the women that made the arduous journey with their families from South Australia to make a new life for themselves in a harsh land. Was it a simple case of brain chemistry imbalance that would be resolved with tablets today? Her condition was probably not understood at the time but she was cared for by the community the best way they knew how. Whatever it was I think she deserves to be remembered. The community in this remote part of the state did their best to care for their own and the task they took on to construct the building and keep and care for her was enormous. Their commitment was something that I believe their descendants should be proud of. The woman was the way she was through no fault of her own the condition was looked on with shame and the solution was usually to send them away to an asylum never to be seen again. This community stood up and did the best they could to care for her themselves at great cost in time and effort.

That, I believe is something to be proud of.

History needs to care for her and remember her and her carers not forget them; she could not help what she had become. We will probably never know who she was.

History also needs to remember the commitment made by the community to care for her. Their effort was enormous.

The building needs to be kept as a monument of hard times and the lengths that the early settlers were prepared to go to in order to look after their own. The building may seem small and harsh, but it isn’t that much smaller than the many examples of early homes of similar construction they built to house their families in that can be seen throughout the area.

Limestone walled buildings with dirt floors were common in this area and other examples can be seen from the road at Albacutya West and hidden away on private property as well as in many parts of Victoria and South Australia. My Great Grandfather John Bergin told me that his first home on his selection was a hole in the ground with a bark roof. Great Grandma mixed cow manure and mud to make a slurry that she spread on the floor and when it had dried she polished it with wax. My grandmother told me once that you could see your face in it. It was so shiny.

Most of these buildings have been destroyed. Mostly through lack of interest and an important part of the past will soon be lost. This particular building has more reasons to be saved as it is representative of the culture and determination of a generation of Victorian pioneers who conquered this land. 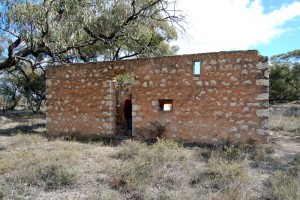 3 thoughts on “The Mystery House at Pella”